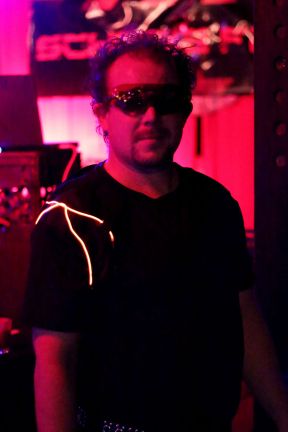 Schema Factor is the musical moniker of Leif Bloomquist, a prolific electronic musician based in Toronto, Canada.

Computer-based sounds, samples, effects and music have been a lifelong interest, even since the days of the Commodore 64.  Classically trained in clarinet and percussion, he now composes using sequencing software while incorporating eclectic and home-built hardware.

His material can be heard in such diverse environments as on CBC Radio 3, ambient music festivals, gothic nightclubs, and churches. Leif is a founding member of the Independent Electronic Musicians Collective, and has released six albums to date through his Schema Factor and Interweaver projects.

In 1992 I began to build on my lifetime interest in electronic sounds, resulting in the creation of Schema – a virtual band consisting of myself, in 1994.  Schema’s first release was Geosynclical Law Enforcement Satellite in 1996 – a 40-minute cassette with 12 tracks.  The title came from William Gibson’s novel Virtual Light.

In 1999, a long-awaited second album was released on CD: Exorage.  This was a full-length album (55 minutes, 16 tracks) which was again very well received, receiving significant exposure and radio play.  A Schema site was created on mp3.com allowing for much greater exposure and networking.

In 2003, Schema Factor was included on the Varia Compliation which featured a number of select industrial and electronic acts from across Canada.  The third album “Xenogothic” was released.

In 2008, an album “Redux” was released, featuring new and live material plus remixes by Zug Island, Strange as Angels and Inferiority Simplex.

There were sporadic live gigs and performances, and then in 2010 I renewed my commitment to live performances.  I began to incorporate elements of dance and interactive technology to provide a more immersive experience.  Momentum in this area is growing exponentially and I have been collaborating with several others – see below.

The latest release “Plasmavore” featuring all new material was released in 2016. 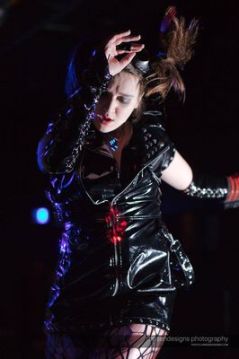 Candice Irwin is an emerging artist working in dance, film, and performance art. She holds a BFA honours dance from York University with a focus in dance science and performance. She is a founding member of us arts collective and the artistic director of Body Stories and Your Dance Fest. Her work has been presented on Norwegian Cruiselines, at The Toronto Fringe Festival, The SummerWorks Performance Festival, The Chimera Project’s FRESH BLOOD, Dance Matters, 60×60 Dance Toronto, the King Street Alternative Video Festival, and by Theatre Passe Murraille. As a performer, Irwin has had the privilege of working with artist including Anandam Dancetheatre, Peggy Baker, Susie Burpee, Expect Theatre, Sky Fairchild-Waller, Karissa Fyrrar, Kaeja d’Dance, Keiko Kitano, Random Acts of Dance (RAD) and Lynda Reino. As well as being an active performer and creator, Irwin is also a dedicated educator and arts administrator. For more information please visit candicejmirwin.com

Mary-Margaret Scrimger is an internationally trained circus artist who has been a key participant in a variety of performances including Cascades by Anandam Dancetheatre, an aerial rope installation which was a 2014 Nuit Blanche highlight; Glaciology by Anandam Dancetheatre, a 2015 Nuit Blanche durational piece; Cirque-It, a Noble Sky production which melds fashion, wearable technology and performance; and The Long Forgotten Circus Doll, a video installation using video, photography and story telling. In addition to performing, she has extensive experience with choreography and act development. Scrimger has performed in well-known venues such as the Art Gallery of Ontario, Theatre Passe Muraille and the Blue Bomber Stadium. Scrimger is best known for her hilarious trapeze character, Henry, the fun-loving alien. With a smile on her bum and googley eyes on her feet, Henry is right side up when Scrimger is upside down. This act challenged circus boundaries and brings unexpected theatrical elements. 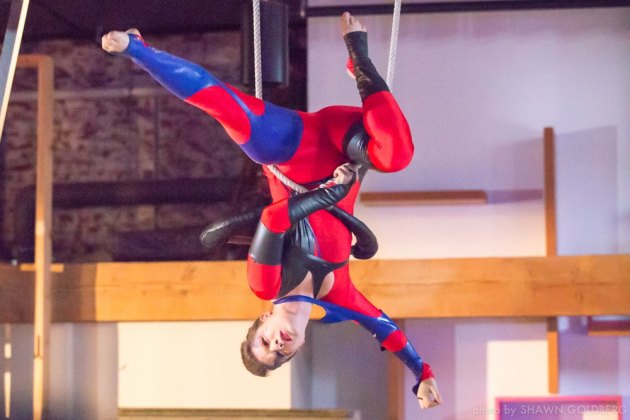